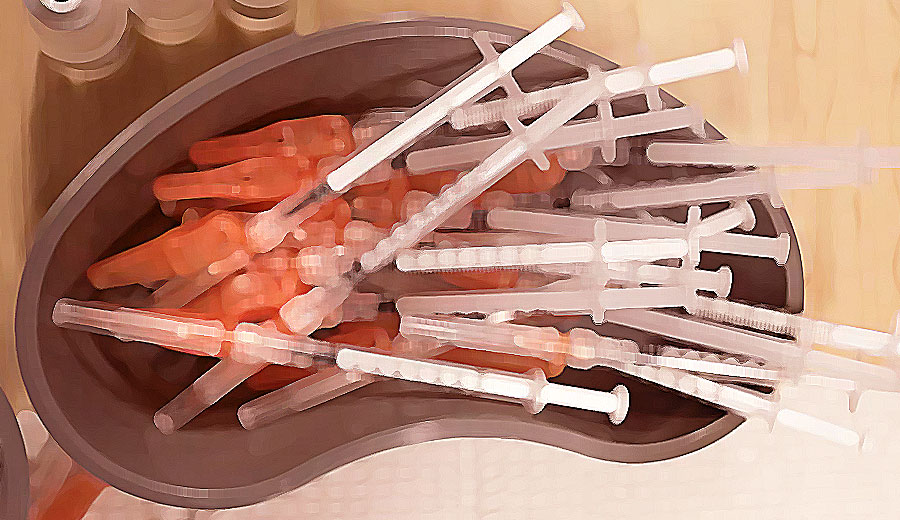 The Goalposts Keep Moving-Where’s Your Line?

That the mRNA-based COVID shot is not a real vaccine is evidenced by the sheer number of “boosters” required to keep COVID-19 at bay. When the injections were released at the beginning of 2021, the promises flowed.

Getting the two-dose regimen was said to be 95% effective and would keep you safe from serious infection. If everyone would just roll up their sleeves and get the jab, the pandemic would be over in no time. By mid-July 2021, just over half the adult U.S. population had received the shot. (Specifically, 56% had received one dose, and 49% were fully vaccinated with two doses.)

Well, before the year was over, reality started setting in, as effectiveness waned far more rapidly than anyone expected. What’s worse, the shot actually increased the infectivity of the Delta variant, and toward the latter part of 2021, hospitals around the world were starting to fill up with “vaccinated” COVID patients.

So, in a little over one year, we’ve gone from “two mRNA jabs will ensure you won’t carry the virus or get sick or die of COVID” to “you need a booster every four months and you can still contract, transmit, get sick and die of COVID.” At this rate, we’re looking at three injections per year, and the fully-jabbed and boosted are still getting sick with COVID.

For example, we recently found out that 7 in 10 “vaccinated” CDC employees got breakthrough infections in August 2021, and Princess Cruises reported an outbreak onboard the Ruby Princess in March 2022, despite a 100% “vaccination” rate among both crew and passengers, plus proof of a negative COVID test prior to boarding.

The Shifting Narrative in Vaccine Efficacy
aka: The Stream of Lies

Remarkably, the FDA made the decision to approve another booster without convening its expert voting committee, as is the norm. As noted by Dr. Marty Makary in a Wall Street Journal op-ed:

“The Food and Drug Administration last week authorized Americans 50 and over to get a fourth COVID vaccine dose. Some of the FDA’s own experts disagree with the decision, but the agency simply ignored them.

FDA should explain their erratic behavior:
💉Bypassed experts to authorize 4th dose
💉Gave Pharma more than they asked for (application for >65yo, but EUA for >50)
💉Months delinquent on Covaxin application (better vax for variants)
💉I explain more here:https://t.co/GOD6cVYoQb

It's no wonder that two leading vaccine experts at the FDA left the agency over political pressure over the issue of boosters.https://t.co/sslLqX3esh

‘UK Gov. Report’, Fully Vaccinated Account For 9 In Every 10 Covid-19 Deaths In England

Experts: We Cannot Boost Our Way Out of the COVID “Pandemic”

What we really need, Barouch(a physician and vaccine researcher at Harvard Medical School)  said, is “vaccines with better durability.”

As reported by The New York Times, the Kamakwie district in Sierra Leone has registered a total of just 11 COVID cases since the beginning of the pandemic, and no deaths. Sierra Leone, in total, has had just 125 COVID deaths since the pandemic was declared. This, despite gathering for large weddings, concerts and football matches without masks.

Bill and Melinda Gates went on record early on in the pandemic stating Africa would be destroyed by COVID unless we made a concerted effort to get the COVID jab to them.

As noted by Del Bigtree in the featured Highwire video above, the shots have basically decimated the immune function of those who took them, and the FDA has no other plan or option now than to roll out a never-ending series of boosters to “top up” people’s immune defenses, even if it’s only to a slight degree. They have nothing else. The damage is done.

DEADLIER VARIANTS? Dr. Geert Vanden Bossche On What To Expect In The Near Future And Why

Not with a bang, but with a tiny little prick

Actual vaccinations are deadest of all.

All over Europe, countries are dropping Covid vaccination passports only months after introducing them. Since Friday, Italy and Greece have become the latest nations to say they will dump passport requirements as of May 1.

Both countries made the usual noises about no longer needing rules because Covid is so under control. “We are of course keeping a very close watch on the epidemic curve,” Italy’s prime minister said.

Viewed over the longer term, the picture is even worse. When Italy introduced its vaccine passport last September, it had roughly 4,000 infections a day. When it tightened restrictions in December, it had under 15,000.

I cannot say this enough times: Covid vaccine restrictions are ending not because the mRNA vaccines have succeeded but because they have failed.

The depth of that failure is so complete that to explain it sounds almost conspiratorial. The mRNA vaccines do not just not work against Omicron, they have negative efficacy, which is why the most highly vaccinated countries in the world now have levels of infection far higher than they had last year or in 2020 – and far higher than countries that did not use the mRNA vaccines.

Here’s Austria, which in January became the first country in Europe to announce not just a vaccine passport but a Covid vaccine mandate. Austria now has more coronavirus infections than the United States – with a population 1/35th as large

No wonder Austria dumped its mandate two weeks ago, before it ever really took effect. And no wonder the German parliament walked away last week from plans to pass its own mandate.

As a result, Omicron is rocketing around Europe and parts of East Asia at levels that were previously unthinkable. Meanwhile, countries that did not use mRNA jab (or to a lesser extent the DNA shot from AstraZeneca) have far, far smaller caseloads.

In the very short run, a second booster may reduce infections marginally. But even the most committed vaccine fanatics are pressing a fourth shot only half-heartedly, since clinical trial data supporting its use basically do not exist, and the pattern is now clear – once the supra-national antibodies wane, the protection does too.

While governments will not openly admit the Covid jabs have failed, their citizens understand the reality. Fewer than 80,000 Americans a day are now getting BOOSTERS – out of more than 100,000,000 people who are eligible. By definition, the booster audience should not be “vaccine-hesitant,” since it consists of people who already took Covid jabs.

Thus the only real question left is not whether countries will be able to convince their citizens to take more mRNA jabs but what happens next to the people who have already taken them – that is, whether they have any kind of durable immunity AFTER they are infected against reinfection either with Omicron or with other variants.

It is too soon to know, but the fact that infections are again rising in Israel less than two months after it saw a massive Omicron surge is worrisome.

The mRNA vaccine era began barely a year ago with incredible optimism. Unfortunately, the reality has been very different.

The question now becomes how much longer the governments, academics, companies, and journalists who pressed these shots on more than 1 billion people can keep denying the truth.