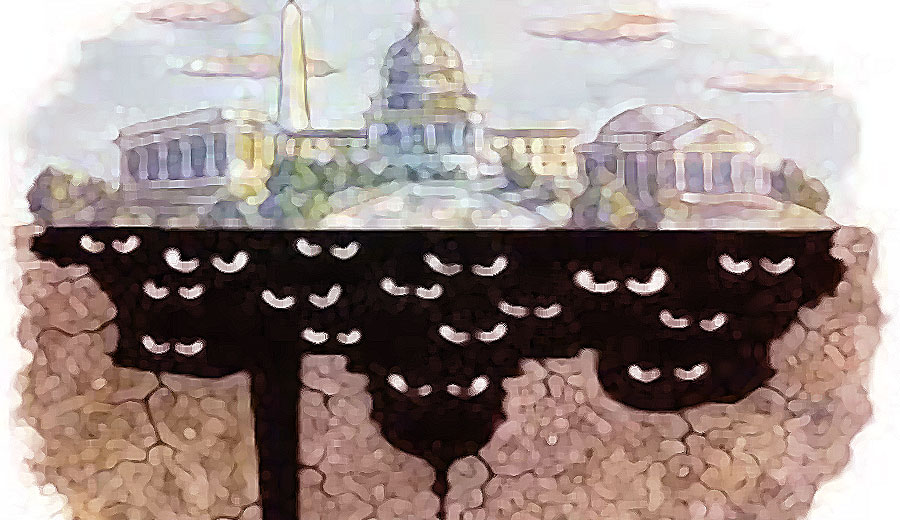 The idea of democracy as it emerged gradually out of the Enlightenment, and drawing on ancient forms in Greece and Rome, is that the people govern themselves. People serve as the main determinants of the rules, laws, and legislation under which they live. They even set the rules concerning what people are allowed to do to themselves and each other using government: such is the point of a constitution.

by Jeffrey Tucker via The Epoch Times,

In a representative democracy, we elect leaders who represent our interests in the halls of government. Crucially, the main point is not the election or even the right of masses of people to vote. Those are means to an end. The end is self-government, government by and for the people, which came to be seen in republican theory as a crucial feature of freedom itself.

Many totalitarian societies have figured out over time how to appear to be democratic without actually being so. When I was growing up, we used to laugh about how the Soviet people had a vote. What possibly could that mean or why would it matter in the slightest if the vote only ends up changing the face and name of the marionette on the balcony reading prepared propaganda?

We as Americans sneered at such a fake democracy. It exists in name only over there, whereas here we have the real thing!

Or so we thought. Every American must absolutely learn the lesson of these last 31 months.

They locked us in their homes, closed our churches and schools and businesses, restricted travel, segregated whole cities based on whether a person had taken a medicine like some kind of dystopian movement, wrecked the entire economy, and separated families by force.

Not one person in this entire country voted for a single one of these things to happen. It was never on the ballot. And for the most part, the elected leaders in this country were not the main actors in this. They gave approval to be sure but mainly because most of them are deeply ignorant, easily led, and deeply scared.

The main actors were people who were never elected. They were appointed bureaucrats. Most of them cannot be fired. They have permanent jobs with high income and benefits. They have vast power, more power it seems than the politicians and certainly more power than you. Indeed they have awesome power over you. And over everything, to the point that they can say whether you can go to church or not or whether your children can play with friends.

Not even the courts can act fast enough to control them and stop them from exercising total power over our lives.

The Deep State has learned that it can announce or wholly fabricate a national emergency and practically put the entire country on a wartime footing wherever it wants. We can tolerate this no longer.

This permanent and unelected class of rules is called the administrative state, or, more colloquially, the Deep State. It exists at the federal level, the state level, and at the city level. In the COVID crisis, they all worked together out of their own interests. They showed their face and their power. We had never experienced anything like this.

Their power is not new. It’s been growing for more than 100 years. What was new was the ferocity of the attack and the brazenness of imposition. They went on TV to brag about what they were doing and shame dissidents. Media companies and Big Tech did their best to give them cover and block voices that made rational points.

In effect, this country became a multivariate dictatorship but the people doing the dictating were mostly not the politicians we elected, though they went along with the whole caper. It was this permanent class of rulers, managers, and specialists who were in charge—people who have never faced the voters and cannot be fired by anyone no matter what.

This is not a just system. It wrecked this country. We pay the price every day now: rent, gas, groceries, bills, and now job loss. All of this wreckage you see today traces to what they did. It’s why your child is behind in language, math, and reading skills. It’s why your grandmother died alone and no one could attend her funeral. It could be why your friend’s husband died suddenly. It’s why your brother has a crisis-level addiction to liquor, weed, and pills.

The administrative state waged a war on the country for longer than two years. No politician in the country had the power to stop it. Once Trump greenlighted this mess in March 2020, he was effectively unseated from power and became like the marionettes in foreign countries about whom we used to laugh: talking a good game but ultimately powerless in the face of the real power behind the scenes.

Now let’s talk about the Red Wave. It is a means, not an end. The question now is: what is to be done. I strongly suggest that all new officeholders take a gander at the Federal Register and search for agencies. What you find is a list of 434 of them. Print it out. Using your brain and a red pen, strike out those that are nonessential—same as these people did with millions of workers.

Let go of the idea that these agencies can be cut. They need to be abolished. When Elon Musk took over Twitter, he didn’t reduce the hours of the employees who were just taking up space. No, he immediately sent them packing. That day. No more email access. No more Slack access. Gone. Now. The new Congress needs to do this to, let’s say, half of the 434 agencies. Bring down the number to 200. That should be the goal.

The private sector has gone through massive cutbacks and families too. Government must do the same. And not just for financial and economic reasons. It needs to be done to restore government by the people. Then we need serious changes in the employment status of any federal bureaucrat who remains. If the person is involved in any aspect of policy-making, that person needs to be reclassified as an at-will employee, same as exists in the private sector.

This is just the beginning. There is another layer of the Deep State that is not employed by government. It lives in the private sector that is well-connected. Think of a person like Scott Gottlieb. You have seen him on TV for 30 months, pontificating about the need to lock down and get the jab. He is a former commissioner of the FDA. He now works for a fancy think tank in Washington, D.C. that is funded by industry and foundations. He also sits on the Pfizer board, which must pay pretty well, so he is, in effect, a lobbyist for Big Pharma who only pretends to be an independent intellectual.

When Jared Kushner needed advice on how much Trump should lock down the country, his first call was to Gottlieb. Gottlieb told him to be more stringent than Trump wants. That was his one piece of advice: take away as many rights and liberties as you can get away with.

How does Gottlieb or Bill Gates fit into this deep state structure? They are essential to it. But no one elected them and they don’t even work for government. This is an enormously complicated problem but the solution must be to break up these networks of influence and control. That’s what must happen if we are to restore democracy.

No system of self-government, of government by the people, can exist with this sort of person exercising such power.

Dealing with the problem of the Deep State has to be the major priority of the new officeholders. It is not enough just to get elected and then celebrate. It means nothing unless there is some agenda, some point, some purpose, some drive, some plan. I’m not really seeing much evidence yet that there is one. We need some focus here now. We might not have another chance.