Miracle Vaccine ~ Wait What? …Not So Fast 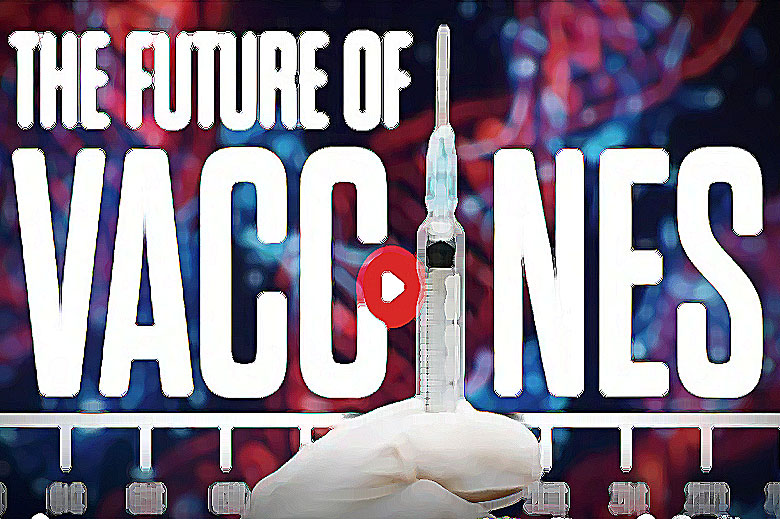 If the Gateses and the Faucis and the representatives of the international medical establishment get their way, life will not return to normal until the entire planet is vaccinated against SARS-CoV-2. What many do not yet understand, however, is that the vaccines that are being developed for SARS-Cov-2 are unlike any vaccines that have ever been used on the human population before. And, as radically different as these vaccines appear, they represent only the very beginning of a complete transformation of vaccine technology that is currently taking place in research labs across the planet. This is a study of The Future of Vaccines.

Please take 40 minutes to absorb some well-referenced information to cut through the noise of the mainstream media cheerleaders.

Since the dawn of the corona crisis, we have been told over and over that the world has changed forever.

…This message has been repeated so frequently and so consistently by public health officials, political “leaders” and media commentators that many have begun to believe it. And now, the public is being prepared for an unprecedented global vaccination campaign. Taking the form of a military operation . . .

. . .the plan is to rush a new generation of experimental vaccines to market and deliver them at “warp speed” before any long term testing has even been attempted…..

For almost the entirety of 2020, a traumatized public has been told that nothing resembling our pre-corona lives will return until there is a COVID vaccine.

But lost amid the hype of this media-led celebration are some sobering facts.

Firstly, these news stories were not generated on the back of publicly accessible data, but literal corporate press releases. This announcement-by-press-release style of corporate self-reporting was immediately exposed as a sham when AstraZeneca was found to have given an “unintentionally” lower dose to one group of trial participants and then touted the results of that smaller dose group without clarifying the confusion….

Secondly, the “success” of these vaccines is not being measured by their ability to prevent infection with SARS-CoV-2, as many in the general public believe, but merely to lessen the severity of the symptoms associated with COVID-19, like coughs and headaches.

Thirdly, the studies are touted as involving tens of thousands of people, but in Pfizer’s trial, only 170 of them were reported as being “diagnosed with COVID-19” during the trial. Of those, 162 were in the placebo group and eight were in the vaccine group. From this, it is inferred that the vaccine prevented 154/162 people from developing the disease, or “95%”. But as even the British Medical Journal points out, “a relative risk reduction is being reported, not absolute risk reduction, which appears to be less than 1%.”

Fourthly, the trials are still ongoing. Although several countries have now issued “emergency use authorization” allowing these companies to begin distributing these vaccines to the public, the stage III trials of the vaccines are ongoing, with several of the planned “endpoints” for the data not being collected for 24 months after injection. As a result, as even the UK’s own “Information for UK Healthcare Professionals” pamphlet regarding Pfizer’s vaccine points out, “Animal reproductive toxicity studies have not been completed,” meaning that, “It is unknown whether COVID-19 mRNA Vaccine BNT162b2 has an impact on fertility.”

Even more chillingly, it is not healthcare professionals who are leading the charge to deliver this vaccine to the world, but the military…..

To be sure, the new mRNA vaccines work on an entirely different principle than any other vaccine that has ever been used on the human population. In order to understand that, it is important to understand the history of vaccine technologies….

Any and all questions about this rushed, experimental vaccine technology are being labeled by the pharmaceutical manufacturers and the corporate press that runs on their advertising dollars as “anti-vax misinformation” and being actively censored. But despite the straw man argument that opposition to the vaccine comes solely from ignorant members of the public who are worried about being “injected with mircochips,” there are genuine concerns about the long-term safety of these vaccines coming from within the scientific community, and even from whistleblowers from within the ranks of the Big Pharma manufacturers themselves.

On December 1st, the former chair of the Parliamentary Assembly of the Council of Europe Health Committee, Dr. Wolfgang Wodarg, joined Dr. Michael Yeadon, a former Vice-President and Chief Scientific Officer at Pfizer Global R&D, to file a petition calling on the European Medicine Agency to halt the Phase III clinical trials of the Pfizer mRNA vaccine until they are restructured to address critical safety concerns associated with this experimental technology….

Even mainstream publications like Scientific American were compelled to note back in June of this year that there are reasons for concern over the way the COVID-19 vaccines are being rushed to market:…

Despite the fact that the clinical trials surrounding these experimental vaccines are ongoing and that the FDA itself admits that there is “currently insufficient data to make conclusions about the safety of the vaccine in subpopulations such as children less than 16 years of age, pregnant and lactating individuals, and immunocompromised individuals” and “risk of vaccine-enhanced disease over time, potentially associated with waning immunity, remains unknown,” governments around the world are contemplating making these vaccinations mandatory, or compelling people to take them against their will by restricting their access to public life until they subject themselves to this medical experimentation….

…Historically  vaccines for coronaviruses have had a terrible safety record. His peer reviewed and published coronavirus research shows unsafe epitopes that will cause autoimmune disease in human subjects.

“Not a single vaccine manufacturer took heed of my warnings.”…’skipped animal safety trials.”

RFK Jr: The Big Question About C0VlD Vac3ines that No One in Media Is Asking

“Do these vaccines prevent transmission?”

“These trials were designed to succeed”

PLEASE listen to RFK’s ENTIRE message at the link below:

It is not only eye-opening if you need that but inspirational as well. PLEASE take the time to hear it.

Once again, the WHO has stepped in to offer some confusing comments about the coronavirus vaccine, warning that there is “no evidence to be confident shots prevent transmission” and that people who receive the vaccine should continue wearing masks and following all social distancing and travel guidelines.

The comments were made by WHO chief scientist Soumya Swaminathan during what appears to have been a virtual press conference held Monday.(12/28)

A clip of the offending line has begun circulating on social media.

“At the moment, I don’t believe we have the evidence on any of the vaccines, to be confident that it’s going to prevent people from getting the infection and passing it on,”

Of course, a close look at the research released by Pfizer and Moderna shows the studies haven’t actually tested whether the vaccines actually prevent transmission of the virus; the goal of the trials was to see whether vaccinated patients presented with COVID symptoms at a rate that was substantially less frequent than individuals who hadn’t been vaccinated. That’s pretty much it.

…an unexpected spike in allergic reactions to the Pfizer/BioNTech vaccine (and now, Moderna too) may prove catastrophic to widespread acceptance unless scientists can figure out what is causing it after the FDA’s rushed approval, and is also why as we reported yesterday, scientists are scrambling to identify the potential culprit causing the allergic reactions.

Making matters worse, Europe rolled out a huge COVID-19 vaccination drive on Sunday to try to rein in the coronavirus pandemic but even more Europeans than American are sceptical about the speed at which the vaccines have been tested and approved and reluctant to have the shot.

“I am not saying vaccination shouldn’t be taking place. But I am not going to test an unverified vaccine on my children, or on myself.”

…..And if the doctors don’t trust the vaccine, one can be certain that the broader population will refuse to take it.

Earlier this week, Ohio Gov. Mike DeWine disclosed that about 60 percent of the nursing home workers in his state have so far chosen not to get vaccinated.

An estimated 50 percent of frontline workers in Riverside County in the Golden State opted against the drug, the Los Angeles Times reported

Less than half of French want Covid vaccine: poll

The FDA says Pfizer’s Covid vaccine is safe and effective. But trial participants warn of intense symptoms after second shot

Allergy risk on Pfizer jab: Day before FDA meet to give green light to vaccine UK regulators warn people with ‘significant’ food and medicine allergies NOT to take it after two health workers suffer ‘anaphylactic reaction’

Four people did get Bell’s Palsy after receiving it, a type of facial paralysis, but the trial scientists said it was not necessarily the jab that caused it and was on par with the general rate of Bell’s Palsy in the wider population.

But Britain’s Medicines and Healthcare products Regulatory Agency (MHRA) on Wednesday warned people with a severe allergy to food or medicine not to get it.

One of the workers, who did not have a history of allergies, remained in the hospital on Wednesday night. Some reactions to the vaccine were also reported last week in Britain.

A U.S. Food and Drug Administration official said last week that the FDA is investigating around five allergic reactions that occurred after people were administered Pfizer Inc and BioNTech SE’s COVID-19 vaccine in the United States.

2 thoughts on “Miracle Vaccine ~ Wait What? …Not So Fast”