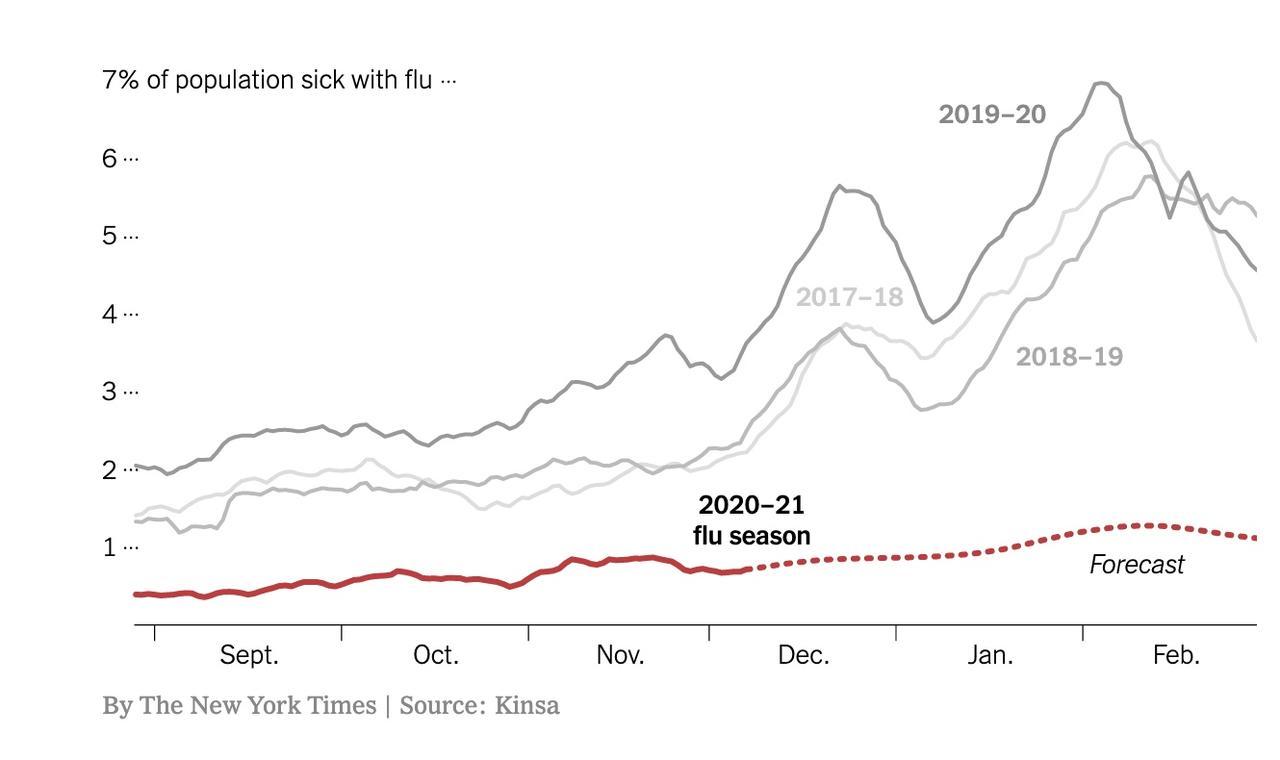 One of the most bizarre features of the “COVID-19 global pandemic” has been the mysterious disappearance of the seasonal flu in medical and public health record keeping. It’s as if the Flu just vanished into thin air after being the most common perennial seasonal respiratory virus.

As it turns out, recorded seasonal influenza cases have literally nosedived by 98% across the globe.

This improbable phenomenon has led a number of experts to ask, “Has Covid killed off the flu?”

“The disappearing act began as Covid-19 rolled in towards the end of our flu season in March. And just how swiftly rates have plummeted can be observed in ‘surveillance’ data collected by the World Health Organisation (WHO),” reported the UK’s Daily Mail.

WHO spokesperson, Dr Sylvie Briand, recently claimed during a press briefing that “literally there was nearly no flu in the Southern hemisphere” of the planet Earth in 2020, but gave no real explanation as to why. She then went on to extend this magical thinking saying that, “We hope that the situation will be the same in the Northern Hemisphere.”

Truly extraordinary science by the health experts at the WHO.

Earlier in December, Southern California news outlet KUSI raised the alarm which prompted an audit of COVID statistics in their region…

SAN DIEGO (KUSI) – COVID-19 cases continue to increase across California, and here in San Diego County, but flu cases remain extremely low in comparison to this time in previous years.

We are well into flu season, but San Diego County’s data for flu infections only shows 36 reported cases so far this year. Carl DeMaio tweeted out this shocking revelation, comparing it to this time in other years saying, “In a typical year we get over 17,073 on average!”

DeMaio explained, “if you are going to use a set of numbers like COVID stats to shut down the economy, to take people’s livelihoods away, then we have to really look closely at what those numbers really mean, and whether those numbers are giving us the right picture.”

Continuing, “my concern has been from the get go, that we are relying on unaudited numbers from government agencies, that may have a different agenda at stake. We would benefit from having a different set of eyes looking at them, such as an auditor or a citizens review committee. Because again, the decisions being made on these data sets are sweeping, the lockdowns are far reaching in terms of their impact.”

DeMaio then said San Diego County has refused to have any look over or vet our local COVID-19 numbers.

Chairman of Reform California, Carl DeMaio, joined KUSI’s Jason Austell on Good Morning San Diego to explain why he is calling for a “full audit of the COVID-19 data we are seeing reported from our public health system.”

“I first called for an audit of the covid numbers back in June when we found that the county of San Diego and the sate of California were erroneously reporting hospitalization measures. We got tipped off to that by the hospitals and we looked at it and exposed it.”

“Now we’re finding that this same healthcare experts and administrators, who want to remain anonymous have tipped us to a basically non-existent flu season.”

“We have 17,000 give or take flu cases diagnosed in San Diego county every year, uh during the normal years. This season we only have 36. We should already be on pace to be in the thousands.”

“In talking with the experts, what they have said is that it can’t be explained by …social distancing and wearing masks-if that were true we wouldn’t have as big of a spike with covid.”

“The hospital administrators have come to me and said, ” I can’t say this on record but you talk to any public health administrator, any hospital executive across the country, we are not seeing a crisis in our emergency rooms. We’re not seeing a crisis in the hospitals. What we are seeing is a transference of what we see during a normal flu season to what we are seeing right now with covid-19.”

Typically an ICU is designed to operate between 60-100% capacity and federally mandated to handle surges of up to 125% capacity.

Many hospitals in San Diego county can handles surges of up to 150-200% capacity.

What they are suggesting is that symptoms of the flu(as well as pressure for asymptomatic testing) are prompting people to get tested. Because the PCR tests are calibrated to a very high cycle threshold they can be picking up minuscule viral fragments from previous infections.

As different pressure groups and journalists begin to demand answers from the various health authorities, it’s becoming clear now that there has likely been some degree of widespread, systemic administrative fraud designed to over-inflate COVID-19 numbers to the detriment of every other normal seasonal illness or disease.

Paul Craig Roberts from the IPE expanded on all of this in a recent piece:

Is there no flu this year or is flu “the second wave of Covid?” Don’t expect any honest answer from health authorities. They have the fear running strong, so strong that people are submitting to needless lockdowns that are causing economic havoc to their lives and to mask mandates that do more harm than good.

What is it all about?

Is it simply about vaccine profits for Big Pharma?

Or is it about getting people accustomed to arbitrary orders unsupported by legislation? Isn’t what we are experiencing a takeover of our lives by the executive part of government?

Where have all the flu outbreaks gone?

Separately, the WHO claimed that “various hygiene (including mask wearing) and physical distancing measures…likely played a role in reducing influenza virus transmission.”

Mask-wearing is ineffective and potentially harmful to health.

Masks are porous. They have to be. Otherwise wearers would suffocate.

Aerosol spores are minuscule. Able to penetrate all masks and concentrate beneath them risks greater harm to wearers than avoiding their use.

Everything ordered or recommended this year for protection did infinitely more harm than good – notably from lost jobs and income during lockdowns and quarantines.

The CDC casually said “(s)easonal influenza activity in the United States remains lower than usual for this time of year.”

It practically disappeared — or did it?

Covid is “seasonal influenza” in disguise — in the US and worldwide.

In its latest weekly reporting period pre-yearend, the CDC said:

“The percentage of respiratory specimens testing positive for influenza at clinical laboratories is” one-10th of 1%.

For the three-month period in the US ending in late December, findings were virtually the same.

There’s almost no seasonal influenza showing up this year because their outbreaks are called covid.

Overall worldwide, seasonal influenza is around 98% lower this year than in earlier flu seasons.

WHO spokesperson Dr. Sylvie Briand recently claimed that “literally there was nearly no flu in the Southern Hemisphere” in 2020, adding:

“We hope that the situation will be the same in the Northern Hemisphere” at end of this flu season.

If the current trend continues as is highly likely, the incidence of seasonal influenza will be minuscule compared to previous years in northern and southern hemispheres. At the same time in the US nationwide and worldwide, high numbers of covid are reported.

If accurately identified, they’d be called influenza that shows up annually in the US and abroad like clockwork.

No economic collapse occurs that caused the Greatest Main Street Depression in US history this year that’s likely to be protracted to maintain social control and continue transferring unprecedented amounts of wealth from ordinary people to the wealthy.

They’re enjoying a bonanza of riches from what’s going on at the expense of most others.

On December 15, Nature.com noted that “(m)easures meant to tame the coronavirus pandemic are quashing influenza and most other respiratory diseases” – calling what’s going on the “influenza fizzle.”

Claiming “lockdowns stopped flu in its tracks, (outbreaks) plummet(ting) by 98% in the United States” ignored that what’s called covid is seasonal influenza.

Media proliferated mass deception and power of repetition get most people to believe that what’s harmful to health and well-being is beneficial.