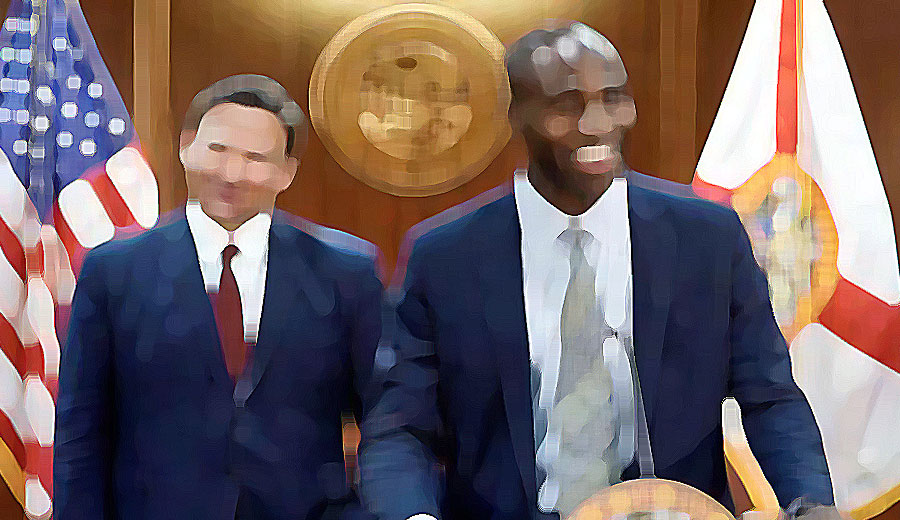 Florida Surgeon General: If You Have No Symptoms, Please Don’t Get Tested

Authored by Jannis Falkenstern via The Epoch Times,

Florida’s Surgeon General Dr. Joseph Ladapo issued new guidance for COVID-19 tests on Jan. 4 in a bid to reduce the strain on the state’s testing centers.

So many people are using the centers the availability of tests is under pressure.

“We are going to scale back,” Ladapo told reporters at a press conference.

“We’re coming back to something sensible.”

People have been flooding Florida testing sites, leading to long lines, he said.

Instead of restricting testing, however, Ladapo said he would place a new emphasis on “high-value” testing against those of “low-value” in order to give priority to tests that would “likely change outcomes” based on a positive or negative result.

For example, someone who is elderly with pre-existing medical conditions and is having symptoms he regards as high value.

Someone who is otherwise healthy with no pre-existing medical issues and with no symptoms is low value, he explained.

Ladapo said people need to get back to a “sense of normalcy” in society.

“We need to unwind this sort of planning and living one’s life around testing,” Ladapo said.

“It’s really time for people to be living; to make the decisions they want regarding vaccination; to enjoy the fact that many people have natural immunity; and to unwind this preoccupation with only COVID as determining the boundaries and constraints and possibilities of life.

“And we’re going to start that in Florida.”

Ladapo said Omicron is “on the rise” in Florida and cases are “vertically climbing,” but people are being “whipped into a frenzy” over it and there is no need because the variant is “much less violent” than other variants that have spawned from the COVID-19 virus.

“What you’re seeing in cases is actually just a fraction of what’s happening in the community,” he said. “For example, the CDC [Centers for Disease Control and Prevention] estimates that only one in four cases of COVID are diagnosed, that may be an even bigger ratio with Omicron.”

He said that Florida has seen a rapid increase in cases and hospitalizations, but added it is not comparable to the case rise.

“A substantial share, based on the data we have from some of our hospitals of the patients in hospitals with COVID, are there in the hospital with COVID rather than for COVID.”

In other words, people who go to the hospital are there for other reasons and then test positive for COVID-19 because hospitals test everyone who comes for treatment, Ladapo said.

The surgeon general said that federal leadership had “created a monster” in public health.

“What’s happened in the country is that people have forgotten, or abandoned basic public health principles,” he said.

“Instead, they have opted for things that are anti-public health.”

He said anti-public health is “taking away people’s options” and “ability to choose.”

“Anti-health tends to be mandates,” he continued. “Anti-public health is losing touch with sensibility.”

The Surgeon General’s office wants to educate and provide people with the ability to make “better decisions.”

“That’s what public health used to be,” Ladapo said.

“The federal approach has been to mandate and to create division and strife and really politicize this pandemic.”

Getting back to basic principles of public health is important, he said and part of that is prevention such as weight loss, exercise, and vitamin intake.

Florida Gov. Ron DeSantis was present at the press conference and said COVID-19 tests have turned into “a testing industrial company” and are a “cash cow” for people.

DeSantis urged everyone to live their lives like they did before the pandemic.

Authored by Isabel van Brugen via The Epoch Times,

New COVID-19 cases in the United States have soared to their highest level on record, as the Omicron coronavirus variant is estimated to have taken over the virus’s Delta variant as the most prevalent strain contributing to new COVID-19 infections.

The United States is seeing over 265,000 new COVID-19 infections per day on average, according to data kept by Johns Hopkins University, surpassing a prior record of 250,000 daily cases set in mid-January.

The latest wave of infections is largely being fueled by the Omicron variant of the novel coronavirus. According to the Centers for Disease Control and Prevention (CDC), the strain accounts for 58.6 percent of all strains actively circulating in the United States as of Dec. 25, up from 22.5 percent for the week ending on Dec. 18.

CDC officials have said they don’t yet have estimates of how many hospitalizations or deaths out of the total are due to the high transmissible Omicron variant.

CDC Director Rochelle Walensky on Wednesday told reporters that while some data from other countries showed less severe disease with the Omicron variant, it was too early to gauge the impact across the United States, particularly given its uneven vaccination rates.

“The rapid increase in cases we are seeing across the country is, in large part, a reflection of the exceptionally transmissible Omicron variant,” she said.

“In a few short weeks, Omicron has rapidly increased across the country and we expect will continue to circulate in the coming weeks.”

Walensky noted that while the seven-day daily average of positive cases is up 60 percent over the previous week, the hospitalization rate for the same period is up only 14 percent, to about 9,000 per day. Deaths were down about 7 percent to 1,100 per day, she said.

“While our cases have substantially increased from last week, hospitalizations and deaths remain comparatively low right now,” she said.

Domestic flights in the United States have taken a hit due to staffing issues amid rising COVID-19 cases, with flight cancellations continuing to cause holiday travel chaos nationwide. By mid-afternoon on Wednesday, more than 900 flights within, into, or out of the United States were canceled.

The CDC also said it was monitoring 86 cruise ships that have reported COVID-19 cases.

The agency meanwhile issued new guidance this week to cut its recommended isolation time for infected Americans in half—from 10 days to five if they are asymptomatic.

“We are standing on the shoulders now of two years of science,” Walenksy told NPR on Tuesday of the new rules, explaining that “the vast majority of transmission occurs” around two days prior to the onset of symptoms and three days after.

“So in that five day window is really when that transmission is happening.”

Walensky acknowledged that although transmission can occur after the fifth day of isolation, the CDC made the decision to reduce its recommended isolation time for infected Americans because it anticipates a “really large” number of cases due to the Omicron variant of the novel coronavirus.

“We also want to make sure that we keep the critical functions of society open and operating. We started to see challenges with that, with airline flights and other areas,” the CDC director explained.

The Danes are now publishing extremely detailed daily data about Covid cases and hospitalizations – not just about Omicron, but all Covid variants.

And, in news that will surprise precisely no one who has been alive the last two years, they paint a picture entirely different than what the media claims.

Omicron – which continues to appear significantly less dangerous though more transmissible than earlier variants of Covid – has been used as a cover for vaccine failure.

Most new Covid cases in Denmark occur in people who are vaccinated or boosted – and that is true for both Omicron and earlier variants. More than 76 percent of non-Omicron Covid infections in Denmark are in vaccinated people, along with about 90 percent of Omicron infections.

ZERO RISK: Sweden & Germany: No Deaths In Children Due To COVID