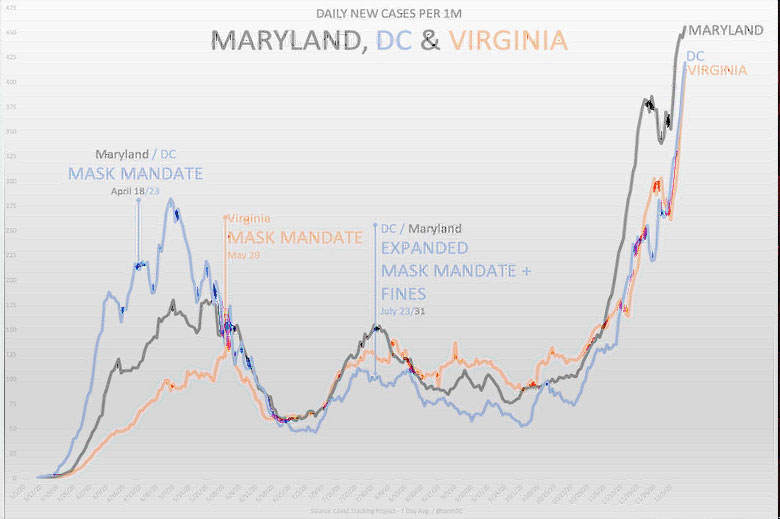 Also, With COVID hospitalizations increasing, though, how can this be?

Some states, such as California, ordered sweeping shutdowns. Others, such as Florida, took a more targeted approach. Still others, such as South Dakota, dispensed information but had no lockdowns at all.

As a result, we can now compare outcomes in different states, to test the question no one wants to ask: Did the lockdowns make a difference?

If lockdowns really altered the course of this pandemic, then coronavirus case counts should have clearly dropped whenever and wherever lockdowns took place. The effect should have been obvious, though with a time lag.

New infections should drop on day one and be noticed about ten or eleven days from the beginning of the lockdown. By day six, the number of people with first symptoms of infection should plummet (six days is the average time for symptoms to appear). By day nine or ten, far fewer people would be heading to doctors with worsening symptoms. If COVID-19 tests were performed right away, we would expect the positives to drop clearly on day ten or eleven (assuming quick turnarounds on tests).

To judge from the evidence, the answer is clear: Mandated lockdowns had little effect on the spread of the coronavirus. The charts below show the daily case curves for the United States as a whole and for thirteen U.S. states. As in almost every country, we consistently see a steep climb as the virus spreads, followed by a transition (marked by the gray circles) to a flatter curve. At some point, the curves always slope downward, though this wasn’t obvious for all states until the summer.

Lockdowns Not the Cause

The lockdowns can’t be the cause of these transitions. In the first place, the transition happened even in places without lockdown orders (see Iowa and Arkansas). And where there were lockdowns, the transitions tended to occur well before the lockdowns could have had any serious effect. The only possible exceptions are California, which on March 19 became the first state to officially lock down, and Connecticut, which followed four days later…..

…Something caused this overall decline. It couldn’t have been lockdowns, which weren’t maintained (or heeded) in full force through June. At the moment, we can only speculate. But if this virus is like others, its decline is likely attributable to some mix of changing seasons and the gradual onset of herd immunity…..

Or how about Arizona, Nevada, and California. Different policies, same result:

Remember how awful Thanksgiving was supposed to be?

Well, here’s what happened in the Midwest:

Was everyone in every single one of those states behaving recklessly, and then suddenly, right at Thanksgiving, they thought better of it?

Or might the virus do its thing no matter what?

What about hospitalizations? These, too, are supposed to be our fault…..

Yinon Weiss (@yinonw) has dug up the relevant information on current hospitalization trends.

Let’s start with what the big picture looks like:

I’ll bet most people don’t think the chart looks like that.

Now given that the U.S. has 6000+ hospitals, some number of them will experience high occupancy from time to time, as has happened numerous times in the past. The chart above shows the aggregate numbers, which do not appear to be abnormal.

With COVID hospitalizations increasing, though, how can this be?

Yes- because everyone entering a hospital is given a PCR test (as we know also have a HIGH RATE OF FALSE POSITIVES).

So if you come in with a broken foot and they swab you for a PCR test, chances are you’ll be a covid patient & statistic.

Important to know what last year looked like, isn’t it?

One thought on “Stats Hold a Surprise: Lockdowns May Have Had Little Effect on COVID-19 Spread”