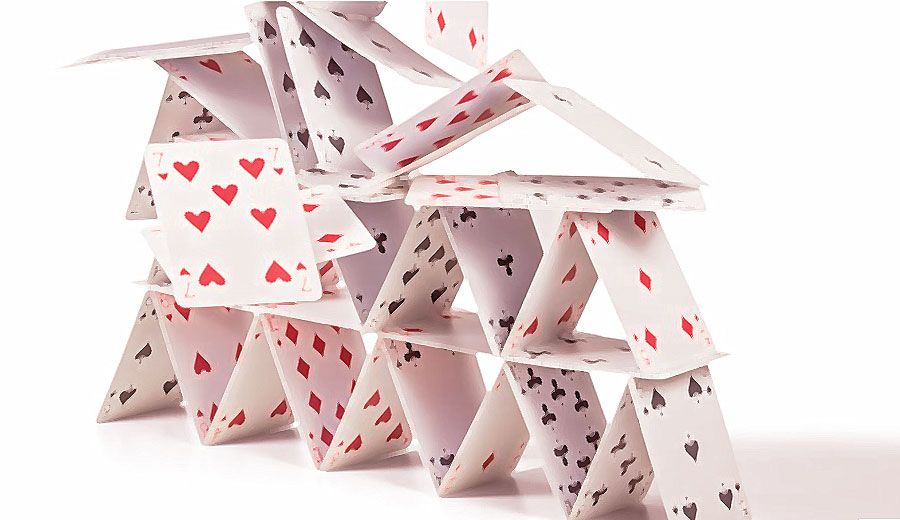 The house of cards continues to fall apart…

There is simply no justification for continuing to mandate masks in schools.

General mask mandates for most of the country have all but ended.

Outside of a few fanatical true believers like Los Angeles County and entertainment industry events like Comic-Con, almost no one is still mandating masks to go about daily life.

What they are doing however, is forcing masks back onto children in schools.

Perhaps the most indefensible “intervention” during the pandemic, school masking has confusingly become the most prominent reoccurring mandate across the country.

While it has seemed like this inexcusable policy would mostly be limited to far left areas, the most recent announcement comes from a much more surprising city; Louisville, Kentucky.

Louisville joins San Diego schools, who also announced a mandate of their own recently.

This is despite the overwhelming amount of data and evidence that’s accumulated over the past several years that school masking is completely ineffective. Not to mention the tremendous learning loss from virtual schooling and missed in person education….

Just recently, a study on school masking was released comparing two school districts in North Dakota during the fall and winter of 2021-2022.

The Fargo district had a mask mandate in effect starting when school returned in August, while their neighboring schools in the West Fargo district did not.

The results were nearly identical, with Fargo (in black) having a higher peak than their maskless neighbors:

The study authors even attempted to get compliance rates, which based on their conversations, showed that roughly 5% or less of students in the non-mandate schools were masking, compared to 95+% in the mandate district.

Many more studies and comparisons show the same results.

There is simply no justification for continuing to mandate masks in schools.

While it’s unsurprising that cities in California or New York or Illinois will inevitably bring back mandates to assuage their own fears, it’s disturbing that a city in a red state like Kentucky would also return to forced masking.

Parents in these areas might have assumed that their children would be spared from this ineffective, destructive policy. But Louisville shows once again that the commitment to anti-science appeals to authority is possible anywhere.

Once again, Ron DeSantis has shown that he is head and shoulders above most politicians, correctly realizing that banning school masking is the only way to ensure that kids aren’t forced to placate delusional adults.

Even now, well after mask mandates have been completely disproven as a potential “intervention” against the spread of COVID, many parts of the world remain committed to this ineffective policy.

A new report from the Daily Mail highlights how comparisons of Australia to New Zealand and Singapore indicate, yet again, that mandates and mask wearing does not reduce COVID cases.

New Zealand continues to have a strict mask mandate that covers nearly all indoor settings, yet cases there continue to rise and are now among the highest in the world, after adjusting for population:

Similarly, Singapore has experienced a rapid increase in COVID cases and other metrics, despite maintaining a mask mandate with exceptionally high compliance and vaccination rates.

Even more embarrassingly, Singapore was specifically singled out as a supposed success story by Jerome Adams, the former U.S. Surgeon General.

Adams claimed on Twitter earlier in 2022 that the city “controlled surges” with “masking and mitigation:”

This is the exact opposite of what was predicted by many supposed “experts” and major media outlets.

No matter how often they’re proven wrong, they continually return to the inaccurate assumption that lifting mask mandates will lead to inevitable disaster…….

“CDC has very clear guidance on this as well through their COVID community levels. And the CDC recommendation is that when you’re in a high zone, that sort of orange zone, you know, people wearing masks indoors is really important, and it really will make a difference.”

Jha never has to face a follow up question asking him why mask wearing indoors is currently not working in other countries, if it’s “really important” and “will make a difference.”

There’s simply uncritical acceptance that what he says is fact, because he is the one saying it. Data, science and evidence are unnecessary when it comes to authorities repeating inaccurate talking points.

Even an Australian infectious disease professor succinctly explained how important imposing a new mask mandates is to slowing the spread: “It doesn’t matter.”

Los Angeles continues to do its best to take the crown of most anti-science city in America.

Recently the head of LA Public Health announced that the city would return to mask mandates if the region remains in the CDC’s arbitrary “high transmission” zone for two weeks.

Of course, in their announcement, no one pointed out that Los Angeles has made a substantial contribution to the evidence base proving that mask mandates do not work.

Los Angles officials continue to pretend that they can control the spread of the virus through indefinite restrictions.

But what’s worse is that despite the rising case and hospitalization rates used to justify endless mandates, a major LA medical system recently posted a video detailing how little COVID currently impacts their hospitals.

During their remarks, it emerged that “Only 10% of COVID positive admissions are admitted due to COVID.”

Meaning that if there are 100 hospitalized COVID “patients,” only 10 are there to be treated for it and 90 are there for other medical issues and just so happen to test positive.

Even more extraordinary is that they admitted that “virtually none of them go to the ICU,” and “they are not intubated…we have not seen one of those since February:”

"Only 10% of our COVID positive admissions are admitted due to COVID. Virtually none of them go to the ICU, and when they do go to the ICU it is not for pneumonia. They are not intubated… we have not seen one of those since February."

NEW: One of L.A. County’s largest hospitals, @LACUSCMedCenter, announces they have only 5 patients being treated *for* COVID & none are severe. @lapublichealth will announce decision on a new mask mandate today, & their chief of comms @Morrow_Brett has gone private on Twitter.

As noted by Phil Kerpen, the video does not appear on any of the LA+USC Medical Center feeds, perhaps in an attempt to avoid creating doubt about the necessity of the upcoming mask mandate.

Beyond the implications, that COVID is no longer causing a significant threat to hospitals in the nation’s second largest city, this story provides yet another example of hypocrisy from Gavin Newsom.

Newsom recently released and promoted a political ad claiming that he’s creating a climate of “freedom” in California as opposed to Ron DeSantis in Florida.

Except when asked whether or not he supported Los Angeles potentially imposing a mask mandate two and a half years into the pandemic, Newsom deflected and refused to answer directly.

Somehow in Newsom’s mind, “freedom” doesn’t mean the ability to walk around without a mask, well after their efficacy has been disproven.

It’s not surprising that LA is likely returning to mask mandates despite the lack of severe impacts on hospitals from COVID. When the director of public health, who is not a doctor, makes nearly $500,000 per year to impose destructive, anti-science policies, it’s clear that no amount of data matters to city officials.

It’s now been a month and a half since the FDA inexcusably authorized the mRNA vaccines for children aged 6 months to 5 years old.

The decision, based on efficacy estimates that would have failed the standard set by the FDA to authorize the vaccines for adults, was greeted with acclaim by COVID fanatics and dismay by evidence based experts.

In fact, many top employees at the regulatory body and other public health agencies have quit in protest, believing that the authorization was politically motivated.

The rush to push the mRNA shots on young children was bewildering for several reasons.

COVID vaccines were initially authorized on an emergency use basis; except with the risks of severe illness so remarkably low amongst young kids, there is no real emergency for this age group.

Not to mention the lack of long term safety data, especially considering the now established risks of myocarditis. There’s also the fact that the vaccines were based on the original variant, which essentially no longer exists.

Discussions have already begun about updating the vaccines for the Omicron variant and mutations will continue indefinitely. Why rush to authorize the shots when they’re already out of date?

It seems that most parents across the country agree with these flaws.

According to recent data, only 2% of children under 5 across the country have been vaccinated for COVID.

That is an utter disaster for the Biden administration and the public health agencies they control.

They pushed the FDA to rush these vaccines out, and they’ve been overwhelmingly rejected.

While the report provides several excuses such as parents being used to getting their young kids vaccinated during visits to the pediatrician, this is the most widely publicized virus on earth. If parents really believed these shots were necessary or “safe and effective” for children, they would be making appointments at government run vaccination sites.

Instead, despite the Biden administration’s best efforts, most have correctly realized that there is no demonstrable benefit for this age group and not an insignificant amount of risk.

Each time the “experts” and their political bosses roll out another supposed “intervention” with the implication that this will finally be the one to prevent the spread of COVID, they get less uptake.

Booster shots have not been as widely adopted as the original series. The second boosters will be even less popular.

Now parents have shown little to no interest in early childhood vaccinations.

This is the only way to ensure COVID does not become a permanent feature of discussion; showing those in charge that no one is listening to them anymore.

For years, the media, “experts” and politicians have created narratives that mask mandates don’t work in the US because of lack of compliance. They’ve defended the need for school masking and that parents were desperate to get their kids vaccinated. Or they’ve claimed that COVID was the cause for the overwhelming majority of hospitalizations.

All of these continue to be disproven.

Hospitals are finally acknowledging that COVID is not the cause for many of the COVID designated hospitalizations. School masking has been disproven by continued high quality research. International locations with high compliance are not controlling the virus with mandates.

Unfortunately we’ve seen a lot of this before.

It’s been clear for years that they were hopelessly incorrect, and yet they’ve continued to push for indefinite mandates and refused to admit mistakes.

Narrative collapse is but a small hindrance, easily dismissed as criticism from unqualified detractors.

But with the fall and winter rapidly approaching, it’s important to continue to dismantle their arguments and head off upcoming potential policy “interventions” before they start.

Mask Mandates Are Ineffective: Another New Study Adds to the Body of Evidence

Masks Make You Sick – Rather Than Protect You

Why Masks Are a Charade